Chris Brown has been ridiculed in the media lately.

The singer has been criticized by his peers for his Grammy performance and winning Best R&B album. He’s received plenty of backlash from the media for recording a few verses on Rihanna’s ‘Birthday Cake’ remix. But that still hasn’t stopped Brown from backing down from his critics.

Wrestler CM Punk tweeted Chris Brown that he wanted to curb stomp him and called him a turd on Feb. 19. Chris Brown responded with a claim that the wrestler was on steroids. Since then, there has been a Twitter war between the two.

It all began with this tweet by CM Punk: 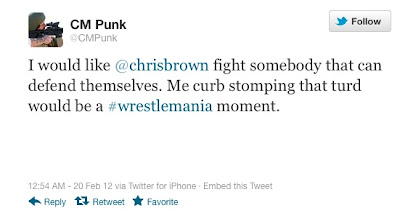 CM Punk didn’t fire back with another tweet but instead with a minute and 52 second video. He responds to Brown’s accusations that he uses steroids and even challenged the singer to a fight, which he doubted he would accept.

Punk also stated that, unlike Brown, he doesn’t have a bodyguard, a manager, PR team and he doesn’t delete his tweets or hit women. Punk also made it clear that he wants to choke Brown out. Watch the video below:

Brown thought Punk’s video was cute. Read his response from the bottom up. 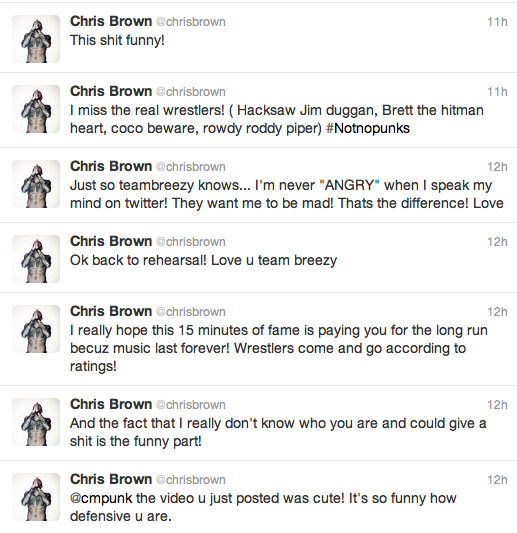 WOW! We can’t wait to see what happens next. But we’re almost positive that Brown will not accept CM Punk’s challenge to a wrestling match. That’s not going to happen, we don’t care how tough you think you are Chris.