Pamela Smith wants Michael Jordan to step up to the plate.

Smith filed a paternity lawsuit against Jordan to prove that he is the father of her 16-year old son, Taj. The lawsuit, filed in Fulton County, Ga., claims Smith became pregnant with Jordan’s baby, Grant Pierce Jay Jordan Reynolds, back in 1995. Jordan was married to Juanita Vanoy at the time.

Smith, who wants permission to change Taj’s last name to Jordan, allegedly never planned to file the suit, but her son pleaded with her to make Jordan acknowledge paternity, TMZ reports. Now more information about Smith is being revealed.

According to Gossip Extra, Smith is an oral-sex expert who teaches couples hwo to spice up their sex lives. Gossip Extra reports:

Smith also goes by the professional name Evette Smith — and she claims to be the ATL’s foremost expert on sex and relationships!

Her website, www.officialqueenofromance.com, says that she works as a certified “loveologist” and relationship coach. Check out her “About me” on her Twitter profile: 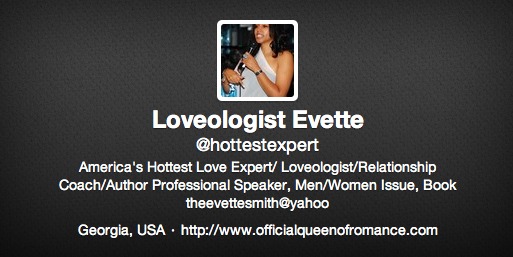 Neither Jordan’s publicist, nor Smith are returning calls for comment.

Jordan denies being the father of Smith’s son. The 50-year old released a statement to The Associated Press on Monday through his publicist Estee Portnoy.

The press release said, “Public records show that the paternity of the child was established in a prior case in this same court many years ago and that Michael Jordan is not the father. He also filed a counterclaim seeking sanctions for the false claims made against him. It is unfortunate that well-known figures are the target of these kind of claims. Michael Jordan will vigorously defend himself and his reputation.”

Jordan’s response to Smith’s Feb. 6 lawsuit said her suit is a “shameless, bad faith attempt to abuse the legal system.”

Jordan, who is planning to marry Yvette Prieto on April 27th has two sons, Jeffrey Michael and Marcus James, and a daughter, Jasmine with his ex-wife.