Whitney Houston’s final farewell took place where it all began.

Houston’s funeral was held Saturday afternoon in Newark’s New Hope Baptist Church, where Houston sang to congregants long before she serenaded sold-out arenas. It was where the singer’s voice emerged as a youth.

The invitation only ‘homecoming ceremony’ had Houston’s closest friends and family fill the music legend’s hometown church. Houston’s family sat to the right in the first three rows with Cissy Houston and Bobbi Kristina seated by the aisle. Houston’s celebrity friends sat to the left in the first seven rows.

The homecoming began with the church choir dressed in white singing a rendition of “Grateful” by Hezekiah Walker. The performance was one of the first of many musical tributes to Houston, with songs from Donnie McClurkin, Alicia Keys, R. Kelly, CeCe Winans, Stevie Wonder, BeBe Winans and more. The homecoming lasted for more than three hours.

“We are here to mourn our loss, but to celebrate her life,” Newark Mayor Cory Booker told the congregation at the start of the service. Rev. Joe A. Carter began the funeral service by reading a bible passage from the Gospel of John.

One of the most memorable moments of the homecoming ceremony was when Kevin Costner, who was Houston’s co-star in the 1992 film “The Bodyguard,” shared a few words. He revealed that he pushed for Whitney to be in the Bodyguard although movie producers felt as though they should get someone experienced and perhaps someone white.

Costner talked about how she even felt that she may not have been good enough when she came in but he was already convinced the part was hers. He ended his tribute with:

“To you, Bobbi Kristina, and to all those young girls who are dreaming that dream, thinking that maybe they aren’t good enough, I think Whitney would tell you, guard your bodies and guard the precious miracle of your own life. Then sing your hearts out.

Off you go Whitney, off you go. Escorted by an army of angels to your heavenly father. When you sing before him, don’t you worry. You’ll be good enough.”

“You wait for a voice like that for a lifetime,” Davis said of Houston when he took to the podium. The two were friends but also shared a mentor-student relationship.

The homecoming ended with Houston’s ‘I Will Always Love You’ playing as paul bearers carried her platinum and gold casket out of the church, followed by her mother Cissy and daughter Bobbi Kristina. 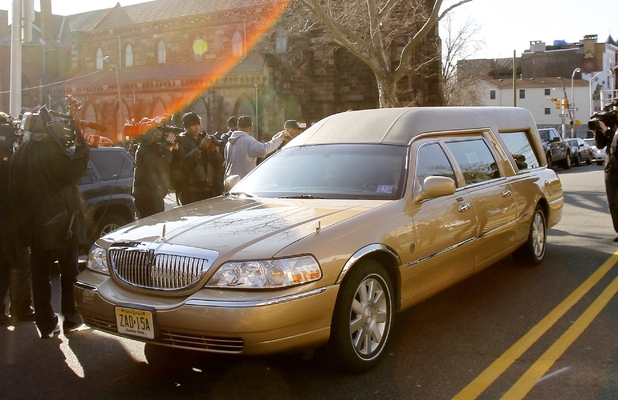 Houston will be laid to rest Sunday at the Fairview Cemetery in Westfield, just south of Newark.

Rest in peace Whitney! You will be missed!