New England Patriots wide receiver Wes Welker’s wife was not happy about the team’s 28-13 loss to the Baltimore Ravens on Sunday.

Anna Burns Welker let her emotions get the best of her and she posted a rant about Ravens star Ray Lewis. Upset that the Patriots didn’t punch their ticket to Super Bowl XLVII, Anna wrote about her frustration in the wake of the media’s spotlight on Lewis.

Anna roasted Lewis about his multiple wives and his connection with a double murder case back in 2000. Anna wrote, “Proud of my husband and the Pats,” Burns Welker wrote. “By the way, if anyone is bored, please go to Ray Lewis’ Wikipedia page. 6 kids, 4 wives. Acquitted for murder. Paid a family off. Yay. What a hall of fame player! A true role model!” Anna has since apologized for her comments.

“I let the competitiveness of the game and the comments people were making about a team I dearly love get the best of me,” Welker’s wife told Larry Brown Sports. “My actions were emotional and irrational and I sincerely apologize to Ray Lewis and anyone affected by my comment after yesterday’s game.” 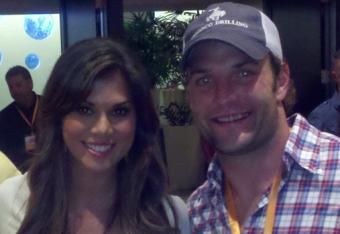 It happens. Anna was venting on her personal Facebook page, but someone leaked the post to the media. But Anna didn’t quite have her facts straight. While Lewis does have six kids, he’s never been married. He also plead guilty to obstruction of justice for making misleading statements to police about the incident, not murder.

But regardless we get her point. He does have a gaggle of kids and he was involved in some way with the double murders of a crime that is still unsolved. It’s easy for some to believe that Lewis was the murderer with so much evidence against him.

Blood of one of the victims was allegedly found in his limo. Lewis also told passengers in the limo to “keep their mouths shut” and the white suit Lewis was wearing that evening has never being located.