Wendy Williams is no holds barred.

Williams always speaks whats on her mind and she definitely didn’t hold back when it came to Fantasia Barrino on a recent episode of her show. She scolded Fantasia after reports circulated that the singer wants her boo Antwaun Cook to help out more financially.

Williams blasted Fantasia on air, telling her she was dead wrong for getting involved with Antwaun because she knew he was married. OUCH!!

Before Williams began her rant she told her audience that she was about to have a heart to heart with Fantasia. This is what she said:

“Now Fanny, I know you might be nursing at the time and you are a big fan of the show. I want to talk to you through the TV because I love you so much. Fantasia, you knew he was married and unavailable to you when you started sleeping with him. A separated man doesn’t make a single man, it means he’s separated. Fantasia, I don’t know whether it was a broken condom or maybe you miscounted the days if you happen to take a pill. You had control over this entire situation.”

“As a wife, and I always root for the wife, you were dead wrong for this one,  Fantasia. I will never say that you get what you deserved, and it pains me to talk to you this way. But Fantasia you haven’t sung in ages. You’ve got a family that (we all saw on that reality show) that blood sucks financially off of you and you weren’t in a position to have another child, especially with a married man who already has two kids that works at the T-Mobile store. He’s not going to marry you because it’s cheaper not to divorce his own wife, unless you go multi-Platinum.”

But could Antwaun be getting the last laugh. Cook is now in the bail bondsman business. He has named his new company after Fantasia’s song “Free Yourself.” Its called Free Yourself Bails Bonds Inc. When the couple first met he was working at T-Mobile but it appears he has branched out. 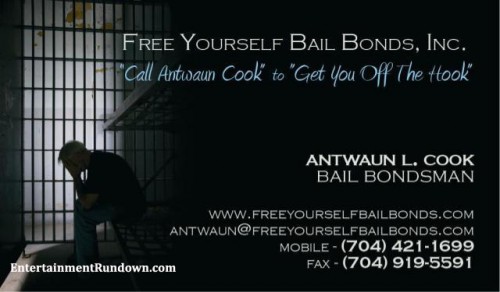 According to Cook’s Manta profile:

As a bail bondsman, it’s my passion to make sure my clients get back to those who matter most, jobs, and all the things they love to do. We truly believe that everyone is innocent until proven guilty. Nobody is perfect, everyone has ups and downs, if you find yourself in a jam, call us to set you free. We are discreet, professional, and prompt, you will be treated with respect and courtesy no matter what the charge is.

“Call Cook to Get You Off the Hook”

Cook also has a professional website, for those who may need his services, Free Yourself Bail  Bonds.com.

Check out the video of Wendy Williams scolding Fantasia below.