Mena even showed off her “R” tattoo that stands for Rich during the episode. Many viewers were not surprised by the revelation because the couple told the media they were engaged during a screening that was held days earlier at New York’s Kiss and Fly Club.

But some viewers may be shock to learn that Rich Dollaz could possibly be cheating on Mena. BallerAlert.com received messages that show Dollaz allegedly trying to hook-up with one of his Instagram followers. Her name is Gabbrielle Hines and she a 17-year old high school senior.

Check out the alleged exchange below. 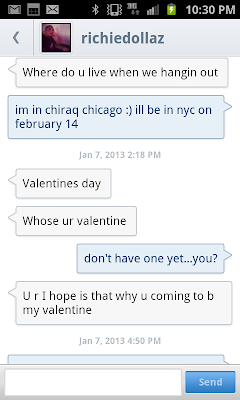 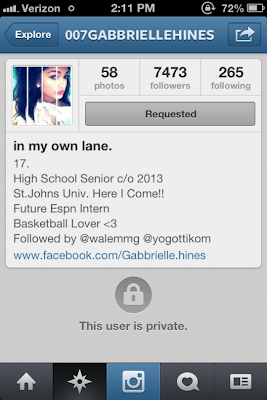 And another woman by the name of Leilani claims she’s his girlfriend.
Read Leilani’s letter to BallerAlert, along with messages below.

“I am Leilani & I have some  tea for you! I have dated and am still involved with Richard Trowers, better  known as “Rich Dollaz” (Olivia’s manager). I have text transcripts, as well as  screenshots of ALL of our convos via text. Rich has told me that him and Erica  Mena are NOT really engaged its just a cover up for a relationship that Erica is  having with another man. I deleted all of our pics together when I got mad and  saw what the blogs were saying about him & Erica. BUT, anyone can tell that  he’s talking about me bc once I tweeted him, he went off & started talking  about groupies, hoes, & all the females comin out around this time of the  year.

Honestly, I don’t know where we  stand right now in our relationship! Yesterday he told me not to “hit him  anymore” but then today he text me & asked: “where are you”.. as if he’s  anticipating my arrival back home in NYC. So who  knows!

I want to expose him for the creep  that he truly is! He LOVES young girls! Preferable 21 & UNDER because he  feels like he can manipulate them & make them do whatever for  him. Normally he goes for the video vixen, actress, model chick type…  But, he definitely LOVES em young!!

I remember one time I drove from  the city(NY) to Edgewater, NJ (his house) just to drop off $100 to him because  he said he didn’t have any money that day & was waiting on a check from his  job. So I helped him out because he was my boyfriend & I didn’t mind helping  him. But, he’s BROKE, & cheap as hell! He definitely doesn’t live up to his  name “RICH DOLLAZ”! Folks should call him NO DOLLAZ!!”

Rich Dollaz Arrested in Memphis For Refusal to Take DNA Test [Details]
We’re not certain if this evidence is legit but Erica better keep her eyes open.