Was Chris Brown and Karrueche Tran Hooking Up During All-Star Weekend? [Photos]

Chris Brown took full advantage of his rift with Rihanna over the weekend.

After the lovebirds sat on opposite sides of the club on Valentine’s Day, Brown jetted to Houston for All-Star weekend while Rihanna headed to London for her clothing line’s fashion show. It appeared while Rihanna was away, Brown may have been creeping with ex-girlfriend Karrueche Tran.

Brown and Karrueche were never spotted together at the events over the weekend. Karrueche had her fun and so did Brown but many are speculating the two may have had some sleepovers at a mansion Brown rented.

Karrueche decided to throw some shade Rihanna’s way and post a photo of the inside of the mansion on Instagram. She posted a photo of the ceiling with the caption, ‘Gnight’ on Sunday.

It didn’t take long for Rihanna and Brown’s fans to realize Karrueche’s
ceiling matched the interior of the mansion the singer rented. Karrueche later deleted the
picture.

Brown on left and Sean Kingston (white shirt) at mansion.

Brown at a All-Star party. 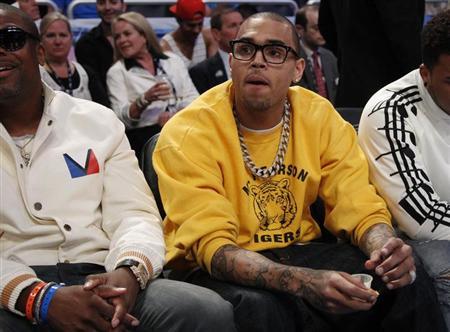 Chris Tucker and Brown at the All-Star game.