Rapper Waka Flocka Flame shocked a few of his fans when he gave support to former Nickelodeon star Amanda Bynes on Twitter.

A few celebs may have turned their back on Bynes because of her bizarre behavior but Waka Flocka is not one of them. The Atlanta rapper gave his support after her alleged comments about Rihanna and her arrest for unlawful possession of marijuana and reckless endangerment.

Check out Waka’s tweets and Bynes response to him below. 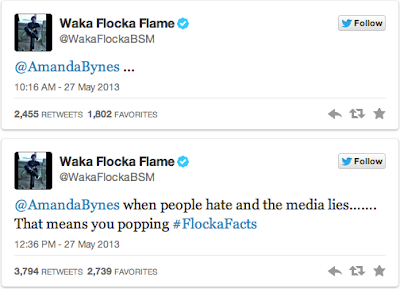 It’s unclear what prompted Bynes to go on a Twitter rant about Rihanna but the next day she claimed it wasn’t her, even though the remarks came from her official account.
“I saw a bunch of mocked up tweets about me bashing Rihanna in my mentions,” Bynes wrote on Twitter. “I’m followed by so many people that someone is always mocking up fake tweets so I feel the need to address them! Rihanna and I met and I’m sure we’ll be in a music video together one day! That’s one of the mocked up images, they took photos of me from outside and morphed them onto someone else’s body.”
Bynes continued, “I am allergic to marijuana and alcohol but I smoke tobacco. Why does Rihanna smoke weed and not get in trouble for it but I smoke tobacco and people think I’m on drugs? I refuse to be treated like someone I’m not, which is why I fought for myself and am suing everyone involved. I don’t need to go to rehab.
Bynes ended with, “There is never a drug or alcohol in my system! I’m sick of all the lies! What would you do if someone accused you of things you didn’t do and yet you still had to be in jail at all over it! I’m so offended but I am so educated that I know cops cannot illegally enter my apartment, sexually harass me, arrest me, take me to a MENTAL HOSPITAL, then lock me up for a crime I didn’t commit. I’m suing them all for this upsetting nightmare. My lawyer knows I’m a model citizen who doesn’t partake in drugs. He’s going to court this week to set the record straight again on my behalf. Thankfully I’m an educated multi-millionaire who knows better than to speak to perverted unjust cops without my lawyer.”
Good luck with that!