Tyga wants everyone to be happy.

Hours after it was revealed that his ex fiancée was engaged to his girlfriend’s brother, Tyga jumped on Twitter and explained why he has nothing but well wishes for the couple. Rob Kardashian proposed to Blac Chyna with a seven-carat ring.

“Everybody deserves 2 be happy,” Tyga tweeted. “What some1 does for their happiness is not my concern, as long as it’s not interfering wit my happiness. It makes me happy to see the mother of my son happy. My only concern in this situation is my son. I want him in happy environments. He’s innocent in this & I want him to feel as much love as possible.” 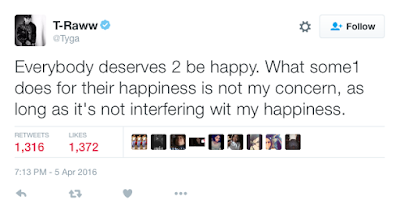 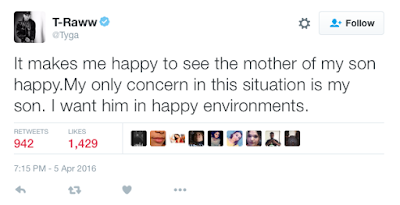 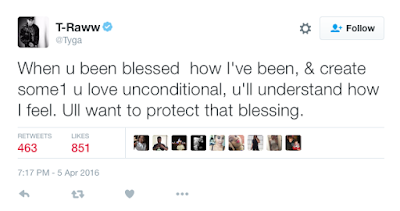 Blac Chyna, whose real name is Angela White, and Rob Kardashian dated for a little more than two months before the reality star popped the question. Chyna to US Weekly she plans to go by Angela Kardashian after the marriage.