Tyga wants the world to know he loves Kyle Jenner.

The Rack City rapper got a new tattoo with the 17-year old’s name on his arm. A photo surfaced on Instagram of Tyga in Paris sporting the “Kylie” ink. Sources told TMZ that Tyga got the tattoo Friday to prove to Kylie he is fully committed to her and no one else.

Tyga also posted his own photo on Instagram, which shows the letter “K” on his inner right elbow.

This comes on the heels of being outed for wanting his baby mama Blac Chyna back. It all began when Tyga sent out a cryptic tweet just days after Blac Chyna clowned Kylie’s lips on Instagram. 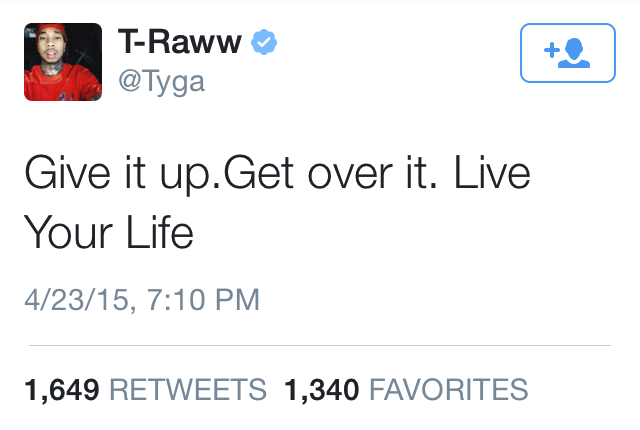 Blac Chyna didn’t like his comment and decided to go for the jugular. She posted text messages that showed Tyga begging for a reconciliation.

Tyga has previously denied dating Kylie, but he has admitted that he has feelings for her.
“I just feel like it’s nobody’s business,” he told Hot 97 in February. “If I love her and I love her as a person, then that’s me.”
Photos via TMZ, Instagram and Enstarz.com