Tyga wants to set the record straight about a few things.

The Rack City rapper stopped by Power 105.1’s The Breakfast Club on Tuesday, and addressed many things, including his rumored relationship with Kylie Jenner and beef with Drake.

The 25-year old continues to deny dating the 17-year old.

“I’m not dating Kylie, so I just want to get that out of the way,” Tyga said. “I want to be clear to everybody that I didn’t leave my family to be with Kylie. That’s ridiculous.” 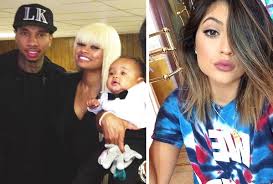 Tyga claims he has a “great relationship” with his baby mama Blac Chyna. Read excerpts from the interview below.

On “dating” 17-year-old Kylie Jenner:
“Nah, I’m not dating Kylie. I want to be clear to everybody that I did not leave my family to be with Kylie. That’s ridiculous. Me and Chyna broke up almost close to a year now. And because of decisions we made, things in our relationship weren’t going right. I didn’t leave nobody to be with anybody.”

On Kylie as a person:
“She’s just a good person. You ever meet somebody and their energy is just good? It’s not negative. She just comes from a good upbringing and I never met somebody like that.”

On not getting paid by YMCMB:
“When I was saying it, I was looking bitter. I was broke when I was saying it. I was just keeping it real. I have a kid now, I can’t be sitting here waiting on the next man. Wayne gave me that opportunity. I would never say anything bad about Wayne. It wasn’t Wayne’s fault cause you see the situation that’s going on now. I don’t really know who to point the finger at.”

On Drake taking shots at him on his new mixtape:
“He knows exactly where my house is, I know exactly where his house is [in Calabasas]. We live next to each other, so my thing is like, if it’s real it’s real, if it’s not, it’s not. I just don’t f*ck with him as a person because of the experiences I had with him personally. It’s not just a beef, just personal experiences I’ve had with him. I feel like he’s a nice guy on the outside, but he’s not genuine. He plays people left and right. That’s just my opinion. And when I did that interview [with VIBE] that’s just how I felt at the time.”

On Nicki Minaj:
“When I did that interview, people was saying I was calling Nicki fake.  That wasn’t the case. I just said me and her didn’t get along at that exact moment. Me and Nicki got into it over a song, but that’s what brothers and sisters do, they fight. I don’t have anything against Nicki. It was a song that Drake was on, it was actually “Truffle Butter”. I was on the record, then it just got weird.”

Watch the Tyga’s interview below.