Tisha Campbell is Tired of the Lies, Speaks on Duane Martin and Will Smith’s Relationship

The cover story on this week’s Star Magazine claims Tisha Campbell’s husband Duane Martin is coming between Will and Jada Pinkett-Smith’s marriage.

The tabloid doesn’t say the two are alleged lovers, but it hints that Martin and Smith are more than friends. And Tisha is tired of the lies.

This isn’t the first time the magazine has made strong accusations about Smith. The publication also reported the Smiths are headed for divorce. So please take this entire article with a grain of salt.

But the article must have rubbed Tisha the wrong way. She had few choice words about the negative press surrounding the Smiths. Tisha didn’t defend her husband but she did defend the Smiths.

Tisha tweeted,”Usually, I ignore negativity, but I’m tired of the media attacking The Smiths. They’re an amazing couple and I wish people would stop perpetuating  lies and leave them alone.” 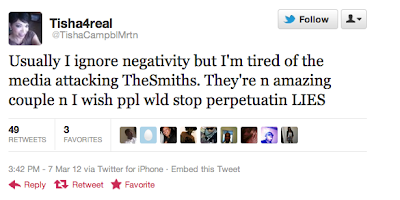 There has been a lot of speculation in the past about whether Duane was gay. Tisha denied the rumors back in 2007, but Will and Duane’s close relationship continues to raise eyebrows.

In Star’s latest issue, the mag reveals Martin and Will’s bromance has affected the Smith’s marriage.

“Will spends significantly more time with Duane than he does with Jada and the kids,” a source told Star. “And as time goes by, Jada is growing more upset about it.” 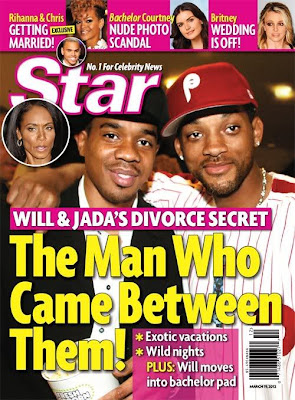 Star claims Will and Duane have gone on several trips together in the last four months. They allegedly took a private cruise to Trinidad and attended a trade shoe in Las Vegas. They were also spotted at restaurants and art openings in Miami.

“Will and Duane definitely looked very close,” a source told Star, who spotted them at Flair restaurant in Trinidad on Feb. 24. And although they were with company, “it was clear Will and Duane both arrived and left together.”

A source close to the Martins and Smiths told RumorFix that there is “nothing going between Will and Duane like that. Will and Jada are happy.”