Satirical website The Onion is known for its raunchy humor about celebrities and daily news events.

But the website went too far with its humor or lack thereof Sunday night. During the Academy Awards broadcast, The Onion tweeted a harsh message about Beasts of the Southern Wild star Quvenzhane Wallis.

Wallis is the youngest to ever be nominated for an Oscar for Best Actress in a Leading Role. The Onion called the 9-year-old a ‘c*nt’ during the Oscars. That comment had the Twitterverse up in arms.

Many came to Wallis’ defense, slamming the website for its insensitive behavior. It led to The Onion deleting the tweet an hour later. But that wasn’t enough, many followers pledged to stop subscribing to the site. Now the website has issued an official apology to Wallis on its Facebook page.

Whoever sent out that tweet should be fired! Calling a nine-year old a ‘c*nt’ in one of the biggest nights of her life was going too far.

But The Onion wasn’t the only ones that made a negative comment about Wallis. John Legend’s girlfriend Christine Teigen took a jab at the childstar. 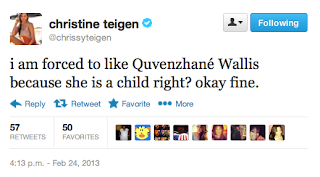 Then Teigen asked The Onion if they were hiring? She later deleted the tweet. Legend’s girlfriend needs to concentrate on her lackluster career instead of picking on a child.