The Game On Canceling Wedding: ‘I Wasn’t Man Enough To See It Through’

Rapper The Game broke off his engagement to Tiffany Cambridge 10 days before the wedding.

The move shocked many of his family and friends, because The Game recently announced he was doing a reality show that would chronicle the wedding to the mother of his two kids. Now it appears the nupitals will never happen.

On Wednesday, the couple shared the news on their wedding website. The message said,”We regret to inform you that the wedding of Tiffney Cambridge & Jayceon Taylor has been cancelled.” 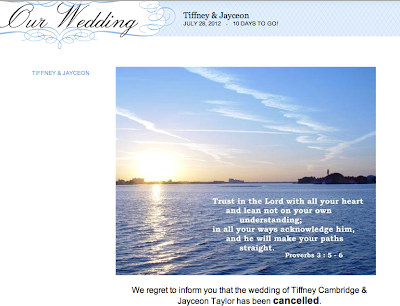 The Game finally addressed the cancellation of the wedding on his Twitter page. He gave a few comments on why he called off his July 28th wedding to Cambridge, who he’s dated on and off for eight years. The Game tweeted:

The rumors are TRUE. The wedding is OFF. It’s not her fault, it’s mine !  She’s a GREAT woman, I just wasn’t man enough 2 see it through.

Important message to all men: If  you’re lucky to have 1/2 of the woman I had…Appreciate her & do everything necessary to keep her happy !

I am truly sorry & apologetic to my family, friends & EVERYONE that  this has affected & inconvenienced.

Not everyone has a happy ending.

Just in case you blogs think I cancelled wedding on some kool sh*t.. I didn’t.. She did cuz of my web of lies, cheating & lack of presence.

This is the second time The Game has called off a wedding. The Game proposed to Valiesha Butterfield in 2006 and called off the wedding a year later. Butterfield is now married to NBA player Dahntay Jones.

Everything happens for a reason. Cambridge may have definitely dodged a bullet.