Teyana Taylor’s mouth got her dropped from her most lucrative endorsement deal.

The G.O.O.D. music singer reportedly lost her Adidas sneaker deal because of her social media fight with Rihanna. The shoe company released a statement to Madam Noire that confirmed she is no longer with the company.

Adidas told the website, “We have ended our relationship with Teyana Taylor and do not have any upcoming product launches with her.”

When asked whether the decision was based on Taylor making a joke about Chris Brown beating Rihanna during their Twitter fight and the Change.org petition to end its relationship with her, the rep added, “All I can say is that Adidas partner with athletes and artists who blend well with our brand. We evaluate our relationships with partners based on the values we hold at Adidas and we don’t condone violence of any kind.”

Earlier in the week, many speculated that Taylor lost her deal when her sneaker didn’t drop on Black Friday. She also posted a cryptic message, “One door closed…So God opened up three more for me.” 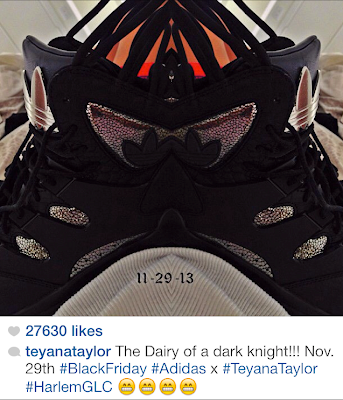 Her publicist denied the rumors with the statement,”Teyana has not been dropped, the sneaker is on hold, no other comments or statement is ready to be issued at this time.”

After the offical word circulated, Taylor responded on Twitter.

Taylor still has one endorsement deal. She’s the face of Crooks & Castles fall collection and is currently working on her album.