Former NFL wide receiver Terrell Owens’ fall from grace has proved to be a long and horrendous ride.

In Owens latest effort to be picked up by an NFL team, the wide receiver signed a deal with Indoor Football League’s Allen Wranglers in February. He signed on to play in all home games and made it clear that he had no intentions of playing in the team’s away games in Nebraska and Everett.

“It is impossible to maintain a player when even our fans notice and comment on a player’s lack of effort both on and off the field,” team owner Jon Frankel said in a statement. “We need to do what is best for this team, our fans and this community.” 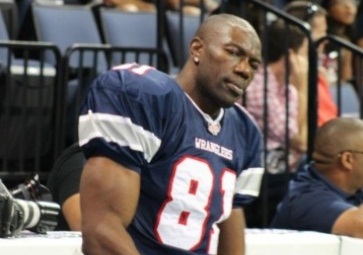 Team president Tommy Benizio added: “The proverbial straw that broke the camel’s back for Mr. Owens was his no-show to a scheduled appearance at a local children’s hospital with other Wrangler players and coaches. It is not the desire of the Allen Wranglers’ organization to disappoint fans by having our most notable player miss a scheduled appearance.”

Owens signed a contract with the Wranglers in February that entitled him toi a six-figure salary and an ownership stake in the franchise that is located about 30 minutes north of Dallas. Frankel said Owens’ ownership stake has been terminated because he violated his contract.

Owens issued a statement  through his publicist regarding his departure:

“It is unfortunate that the IFL Wranglers released Mr. Owens today in the manner that they did. Mr. Owens played all games according to his contractual agreement and was proud to be a part of the IFL and the Allen Wranglers. He was happy to be playing back in Texas and put a national spotlight of interest on the league like never before.

Upon his release today, Mr. Owens said, “I appreciate the opportunity that Mr. Frankel gave me and wish the Allen Wranglers all the best moving forward.”

Mr. Owens’ legal team is addressing the details of the Wranglers release statement that they shared with the media today. We cannot comment further on this.

Mr. Owens remains positive and is focused on a return to the NFL.”

Owens had 10 touchdowns in eight games and caught 35 passes for 420 yards for the Wranglers.