Less than one year after moving into their new mansion, Tamar Braxton and Vince Herbert are moving out.

Tamar and Vince have put their Hidden Hills, Calif. mansion on the market for $7.5 million.  The pair, who moved into the 12,402 square foot home last December, are hoping to gain a $500,000 profit for the sale. The couple is allegedly paying $34,000 a month in mortgage.

The French-style two-story mansion, which is in a gated community, has five bedrooms and seven-and-a-half bathrooms. The massive estate, which is featured on their reality show Tamar & Vince, has marble floors, formal living and dining rooms, a paneled library, island kitchen, a wood-paneled home theater with 125-inch screen and a pub/game room with hand-carved wet bar. 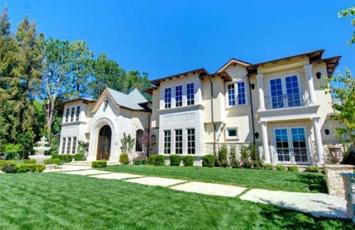 Putting the mansion on the market has sparked rumors that the couple is on the verge of a breakup. The fighting between the two has reportedly taken its toll on the marriage.

Meanwhile, Vince and Tamar are on the cover of Rolling Out magazine.

Vince and Tamar sat down with Rolling Out magazine and talked about how they keep things sexy in and out of the bedroom.

Rolling Out: Tamar, how can couples prevent things from becoming dull in the bedroom and what keeps that spark alive?

Tamar: Vince and I are really good friends and we keep our lives and communication open. On top of that, I just feel like it’s important to remain a lady. I don’t think you should always have your head in a do-rag and a scarf. You should remain the girl they saw [on] date night. There’s nothing wrong with going to bed looking pretty or just as good as you do during the day. The communication is the really sexy part of a relationship. Because when you feel like they can just talk to you, it’s very attractive. … You don’t have to dress up, but don’t go to bed looking crazy.

Check out more of their interview over at Rolling Out.