Braxton Family Values star Tamar Braxton can dish it out but can’t take it.

Tamar issued a cease and desist letter to Love & Hip Hop: Atlanta star K. Michelle for talking reckless about her in an interview. But many were shocked to learn that it was Tamar that issued the letter because she was the one that ignited the feud.

During the premiere episode of Love & Hip Hop, K. Michelle cried her eyes out and revealed that she was allegedly abused by her former boyfriend Memphitz Wright. Tamar, who is close friends with Memphitz wife Toya, didn’t mention any names but she tweeted,”Be happy in Paris while people were still telling fairytales.” 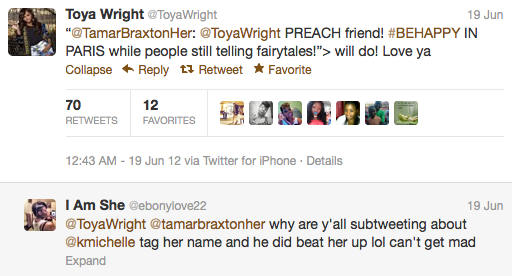 K. Michelle wasn’t too happy when she read Tamar’s comment. When she did a interview with T.T. Torrezz and he brought up Tamar’s tweet, K. Michelle called Tamar a muppet. She invited her to have several seats and warned the Braxton sister that she was from ‘Memphis and they jump gates.’

Apparently, Tamar didn’t like being threatened or called a Muppet. She quietly got her legal team involved and sent K. Michelle a letter threatening to sue her if she continues with her comments.

According to YBF, Tamar is demanding a public apology and money to hire a “reputation management firm” to clear up her good name.

K. Michelle did not mention Tamar’s name but she did fire back with a tweet and the video below.

K. Michelle also had a message for haters. She tweeted a series of comments. 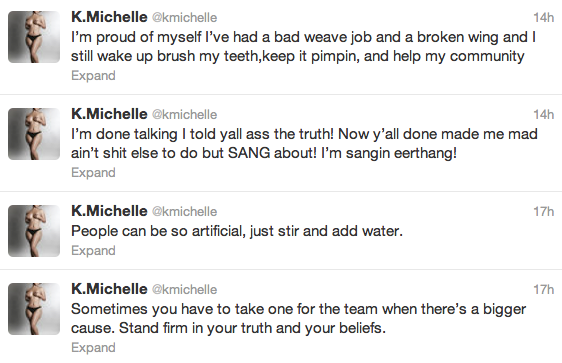