Tamar Braxton Says She Shouldn’t Be in Same Conversation As K. Michelle, She Snaps Back!

It appears that K. Michelle and Tamar Braxton will never call a truce.

The reality stars continue to trade insults, despite the singers sending each an olive branch. Neither one believes the other is genuine and so the foolery continues.

Last week, K. Michelle surprised the world when she publicly encouraged her fans to buy Tamar’s new album Love and War. Many believed it was a nice gesture and believed the two would end their feud. But that didn’t happen.

When Tamar was asked about K. Michelle’s gesture, she revealed she wasn’t impressed.

“I really don’t talk about the people who bully me, like if you do one good gesture, does that make up for you calling me a muppet and for telling everybody I lip sync?,” Tamar told Power 105’s The Breakfast Club. “I don’t want to talk about her. On my third day, I sold over 100,000 copies of my album, so we’re not even in the same conversation in life.” 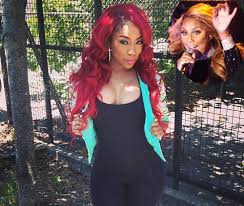 After K. Michelle heard the interview, the Love & Hip Hop star vented her frustration on Twitter. And its safe to say that she wasn’t amused with Tamar’s comments. K. made sure to stick it to Tamar and her husband Vince. Read it below.

And the feud continues. Your move Tamar!
Photos via