While her parents, husband Vince and three-month old son Logan were seated in the audience, the reality star rocked the stage with a medley of Love and War, The One, and her new single All the Way Home.

After the performance Tamar revealed it took her about a year to record the album.

“I feel like it’s my best work yet,” Tamar told Robin Roberts. “Last season of ‘Tamar & Vince,’ in our relationship, we went through a lot. I like to say this is the soundtrack to our relationship, Love and War, because everyone experiences love, but sometimes it feels like war.”

Tamar, who recently talked about the struggles of being a first-time mom told Roberts that parenting is “going great.”

“Logan is the love of my life,” she said. “He’s a great kid and he sleeps all night.” 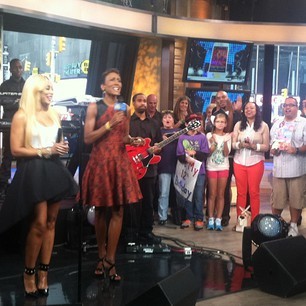 Braxton showed off her post-baby body in a white shirt and ruffled skirt. She paired the look with black Versace stiletto heels.

Love and War is now available on iTunes. The new season of Tamar & Vince premieres Sept. 5 on WE tv.