T.I. Says Women Are Too Emotional To Be President, Gets Clowned For Comments!

Hillary Clinton and Carly Fiorina don’t have what it takes to be president of the United States.

Well, at least that’s what rapper T.I. believes. The Atlanta native doesn’t think women are consistent enough in their decision-making to lead America.

“Not to be sexist, I can’t vote for the leader of the free world to be a woman,”T.I. told DJ Whoo Kid’s “The Whoolywood Shuffle” on Shade 45  radio show. “Just because every other position that exists, I think a woman could do well. But the president, it’s kind of like, I just know that women make rash decisions emotionally — they make very permanent, cemented decisions — and then later, it’s kind of like it didn’t happen or they didn’t mean for it to happen.”

T.I. didn’t stop there. He proceeded to make his point.

“And I sure would hate to set off a nuke,” he said. “You ain’t gonna be able to negotiate the right kind of foreign policy. The world ain’t ready yet. “I think you might be able to get the Loch Ness Monster elected before you could (a woman). It’s not right, but I’m just saying I don’t think,” he said.”

Shortly after the interview aired, T.I. apologized for his remarks on Twitter.

“My comments about women running for president were unequivocally insensitive and wrong. I sincerely apologize to everyone I offended.” 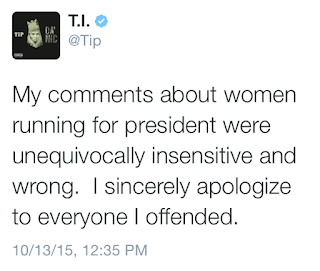 But the backlash was already in full force. T.I. got dragged by social media and rightful so. Many picked at the way T.I. speaks. Check out a few comments below.