Reality star Kim Kardashian stepped out on the red carpet for the first time since announcing she’s expecting a baby with boyfriend Kanye West Monday night.

It was no surprise that Kim would be in attendance at 1Oak nightclub inside the Mirage Hotel in Las Vegas, as she booked hosting duties for a New Year’s Eve Party months in advance. But what did surprise some partygoers was what the Keeping Up With the Kardashians star wore to the event.

Kim walked the red carpet in a lace Julien MacDonald dress, Christian Louboutin pumps and a Lanvin purse. No one can deny for a woman 12 weeks pregnant, she looked great. But many believed her look was too similiar of West’s ex-girlfriend Amber Rose. West’s former love interest debuted her pregnancy back in September on the red carpet of the MTV Video Music Awards in a similar dress.

Although the dresses are not identical, you can’t deny they look similar. Both women are going for the same look, but Rose wore it first so Kim is the style jacker. 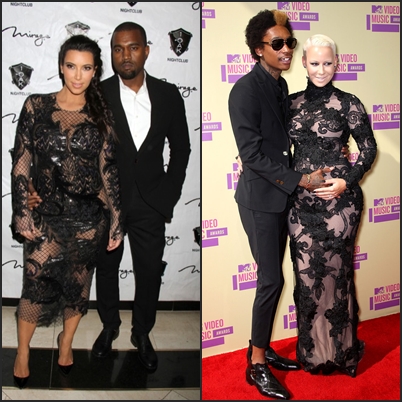 Kim should have steered clear of that dress. Many had already speculated that she would turn up pregnant after Rose and her ex-boyfriend Reggie Bush both announced they had babies on the way. That theory doesn’t seem so far fetched after all.

But this is not the first time the ladies wore similar dresses. Both wore the same dress to different events a few years ago.

Check out a few more photos from Kim’s New Year’s Eve party below.

Kim talks to ET about her pregnancy on the red carpet below.