Soulja Boy Will Not Receive $400 Million From World Poker Deal

Soulja Boy made headlines when he claimed he signed a $400 million deal.

Many didn’t believe Soulja he was telling the truth. But fans tried to take him at his word. 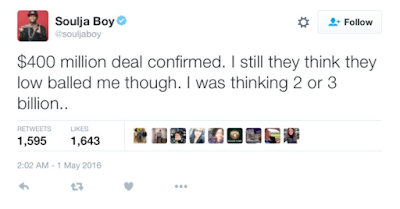 As it turns out, those naysayers were right. World Poker Fund spokesperson Matthew Bird decided to finally clear up some details. According to Bird, Soulja will be joining World Poker Fund’s CelebrityWorld.com, which is a “celebrity owned social gaming site” that will be integrated into WPFH’s upcoming in-flight gaming system.

Bird claims that CelebrityWorld.com, while still in beta, is already earning revenue. World Poker Fund values its in-flight gaming system at $570 million, which, according to Bird is calculated through “traditional incentive-based gaming assumptions.” Despite this number, it isn’t yet reflected in the company’s worth. According to CNNMoney, WPFH has a market capitalization of $52 million, with over $400,000 of losses in the last year.

“He really kind of jumped the gun by using the $400 million figure,” Bird told Forbes. The deal is capped at $400 million, and it’s based on a forward-thinking valuation of the company. He’s young, he’s 25 years old. He got really excited, and he tweeted something he probably shouldn’t have tweeted. He was getting a lot of pressure from within the entertainment community, so he wanted to put a statement out. Obviously, the company’s market cap is at $51.8 million. There’s no way they could cut a $400 million deal. Endorsement deals are calculated on a lot of different factors. This is not a fully cash transaction.”