Snoop Dogg’s son Cordell Broadus has a promising football career ahead of him.

The 6-foot-2, 185-pound wide receiver/defensive back has the potential to become a Division I prospect, so UCLA coach Jim Mora Jr. is getting an early jump on the young man, ESPN reports. Cordell just finished up his freshman year at Diamond Bar High School and has received a scholarship offer to play football at UCLA. 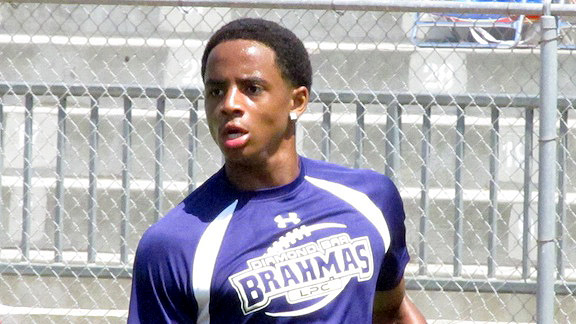 Snoop’s oldest son Corde “Spanky” Broadus just graduated from Diamond Bar High School, near Los Angeles, and is heading into the music business. Corde didn’t seem to be interested in football like his younger brother. The 6-foot, 180 pound graduate played special teams his final season after failed attempts by his father to get him to play quarterback.

“I’ve been taking him into the music studios this whole summer because he has that ear,” Snoop Dogg told ESPN. “I could easily see him following in my footsteps. He is learning the ropes right now, and I can see him taking over this game.”

If Cordell takes the UCLA scholarship, he will be the second athlete from a celebrity to join the team. Diddy’s son Justin Combs will play for UCLA this fall. Justin is expected to play defensive back.