Slim Thug Says He Wishes He Got Beyonce Pregnant Back in the Day! [Details]

Rapper Slim Thug has a few regrets in his life.

And the Houston rapper decided to reveal one of his biggest regrets on Twitter. Slim Thug, who dated former Destiny Child member Letoya Luckett, told his followers he was upset that he didn’t find Beyonce first and put a baby in her.

Luckett is probably not pleased with Slim Thug’s revelation, because he’s basically admitting she was his second choice. Ouch! But at any rate, Slim Thugga was serious. He even dragged two other Houston rappers into the mix to talk about why they didn’t try to snatch up Jay-Z’s wife.

Slim Thug Annouces DNA Results, He is the Father! [Details]

Check out Thug’s tweets and his conversation with rapper Lil O and Delo below. 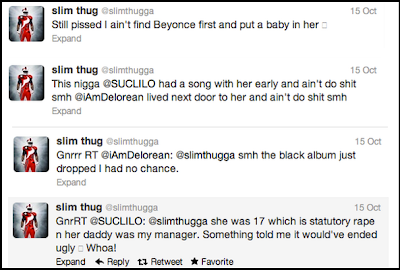 Slim Thug had a chance to make his move on Beyonce a few years ago. He and Bey recorded the song Check On It. Although Beyonce was in a relationship with Jay-Z, she was still technically single.

This is not the first time, Slim Thugga has tweeted about Beyonce. Back in 2009, the Houston rapper admitted to mastaurbating at the thought of Beyonce. Alicia Keys too. Check out the old tweets below.

We’re almost certain Letoya is burning their old photos as we speak.