Rev Run’s son Jo Jo Simmons got hemmed up in Queens, New York over the weekend.

One of the Harlem rapper’s Skull Gang members, Hynief, ran up on Simmons and snatched him up in the middle of the street. Hynief made Jo Jo call Juelz Santana to apologize for a diss track he made about him. Hynief posted the photo below along with the caption:

“Guess who I caught y’all lil punk ass Jo Jo that made the diss track look at his face when he ace! #facts shouldn’t pop shit if u not bout that life real niggas don’t care who u related too fuck nigga.”

Hynief added,”First off 2 everybody hating u can suck my dick 2nd I could of did the boy greasy I let him live its the principles don’t run ya fuckn mouth” 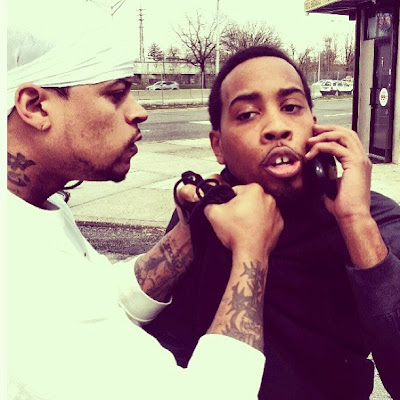 Diggy’s brother appeared to be very shook up in the photo. The entire incident stems from when Juelz took a jab at Jo Jo on the Rick Ross and Meek Mill song, Soft. Juelz rapped, “Far as that dough goes, I’m Russell Simmons, you Jo Jo.”

The verse seemed harmless but Jo Jo didn’t think so. In retaliation he dropped the Juelz’s diss song, Holy Water.

“Now how you gonna mention my uncle Russell/Then disrespect his nephew,” Jo Jo rapped. “The industry forgot you/Fucker, you nothing special/These niggas hate to love you/Simmons will not let you/ Compare your money to my money, boy that’s disrespectful.”

Now Jo Jo has released a video that explains what happened over the weekend. While Jo Jo does his best to appear hard in front of his crew, he brags about counting money and sleeping with women.

“All I been around is money all my life,” Jo Jo said. “I aint’ been around that thug or that gun sh-t all my life, that’s not what I do. What I do is I count money, and I f-ck b-tches, and I travel the world, and that’s what I do. I’m not on that violent sh-t.”

Watch Simmons respond to the attack below.