Funches made a public demonstration outside the Daley Center in Chicago on Friday to bring attention to her financial struggle. She claims Wade owes her a large amount of money but won’t pay up unless she signs a gag order.

Funches sat down outside the Daley Center holding a sign that said “NBA Miami Heat Star Mother of His Children On the Streets.”

“This is the issue: he owes me quite a large sum of money,” Funches told the Chicago’s 89 WLS Sports Pregame Show. “There was an order in place that he would have to give me money. That order also called for the endorsement companies — Gatorade, Staples, T-Mobile, all of the endorsement companies that he has — to make a direct deposit into an agreed upon account. He hasn’t complied with that order, and neither have those endorsement companies made a direct deposit. That went on for years, so I took care of myself and our two children purely living off of savings. The savings dwindled down. I was advised by my lawyer to find a bankruptcy attorney.” 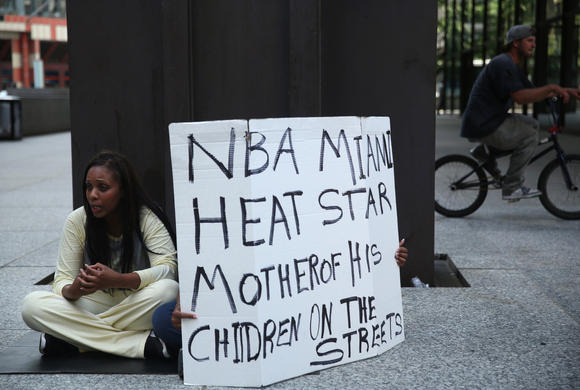 Funches said the money she has received from Wade is not enough to live off of.

“For several years in a row, I got nothing,” she said. “Nothing at all. There was a judge who gave me enough to pay my tuition, so in theory, I got $10,000 one time for example. But then I had to go pay my tuition off. So what did I have after that? I still owed a couple grand.”

Funches said she wants the money to live but doesn’t want to sign away her right to speak.

“I’m out on the streets right now because we can’t reach any sort of agreement. I asked the judge: I don’t want any money, I don’t want anything from Mr. Wade. All I want is my freedom and my voice. Dwyane Wade is saying he will not give me the money that he is court-ordered to pay me and owes me, unless I agree to not say what happened to me or the children. I have to in other words be gagged.”

Funches added,”I can’t say what happened with the judge because I won’t be able to talk about my life and what I’ve been through unless I want to owe more than just live in poverty. You keep your voice, but you’re going to be in poverty. If you want any money to get out of this debt and the hole I buried you in, then you’re never going to be able to speak about the truth and what happened. I told them very clearly: my voice is not for sale. Like Tina Turner did, all she wanted was her name. I told the judge all I want is my freedom and my voice. I want Mr. Wade to leave me alone, he can keep his money.” His attorney Jim Pritikin also issued a statement that claims Wade and Funches reached a agreement three days prior to her demonstration.

“Dwyane Wade and his ex-wife Siohvaughn Funches have reached a financial settlement, he said. “The agreement was submitted in court last Tuesday, July 16 prior to Ms. Funches’ recent unfounded and erratic public display outside the courthouse this past Friday. Dwyane Wade has made several requests over the years to settle this matter, despite Ms. Funches having 16 different attorneys and 2 arrests throughout this process. Mr. Wade has provided a very generous settlement to Ms. Funches to continue to live a wonderful lifestyle for the rest of her life.”

Wade’s attorney also claims the Miami Heat guard has been paying many expenses for his ex-wife, providing her with a $25,000 monthly payment.

“Despite false allegations by Ms. Funches claiming to be ‘homeless’ and ‘destitute,’ Dwyane Wade has maintained over the years financial support to his ex-wife by providing her with income over $25,000 on a monthly basis, timely paid for her home mortgage, maintenance and security at the house, 4 cars, insurance, taxes and all of her attorney fees throughout this process,” Pritikin said. “Ms. Funches has made a mockery of homelessness which is a serious and personal issue for Mr. Wade as his mother was homeless for a period of time when he was a child.”

Pritkin added, “Dwyane Wade was awarded sole custody of their sons by the court in 2011. The safety and wellbeing of his children are his main priority. Due to Ms. Funches’ current unstable mental state, her visitation will be determined by the court. Mr. Wade continues to hope that one day he will have a civil relationship with his ex-wife for the sake of their sons.”

Photos via Zimbio and RealityWives.net