Sheryl Underwood Says ‘Queen Of Comedy’ Badmouthed Her, They Respond

The Talk host Sheryl Underwood dropped a bombshell during a recent taping of the show.

During a segment of the show that reveals the hosts’ secrets, Underwood shared a story about a time when comedians Sommore, Adele Givens and Laura Hayes talked about her behind her back. Underwood claims she turned down being part of The Queens of Comedy after Mo’Nique left because of it.

“There’s a conference call…I dialed in…I hear Sommore, Adele Givens and Laura Hayes all talking about me…I hear discussions about my appearance, my ability…I was startled and hurt…I was bruised, but I wasn’t broken,” Underwood revealed on the show. 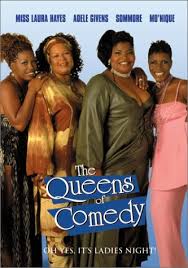 But since then, Underwood has worked with all three comedians. She claims she doesn’t harbor any resentment against them.

Underwood added, “I know you’re probably thinking, why am I saying this now… because I’m right where I belong.”

Now two of the three ladies involved have responded to the allegations. on social media.

Laura Haynes posted a photo of a wig below with the caption: “Now I have take time out of my artistic hustle to respond to this bulls**t COMING SOON Misslauraresponsetosherylunderwoodproducersofthetalk.com #gotmypressureup #aintnobodygottimeforthis #gotpeoplelookingatmesideways #youknowyougotbettersecretsthanthat #interuptingmyediting”

Watch Underwood explain what happened between the comedians below.