Moore wants everyone to know that the rumors are not true. He is not dating former Real Housewives of Atlanta star Phaedra Parks. Moore believes the rumors got out of hand after the two appeared together on Watch What Happens Live.

Moore and Parks had a very flirty appearance on Andy Cohen’s talk show, and the rumors being to spread like wildfire. And it also didn’t help that Parks posted a photo of the two, while promoting Moore’s new show on CBS. 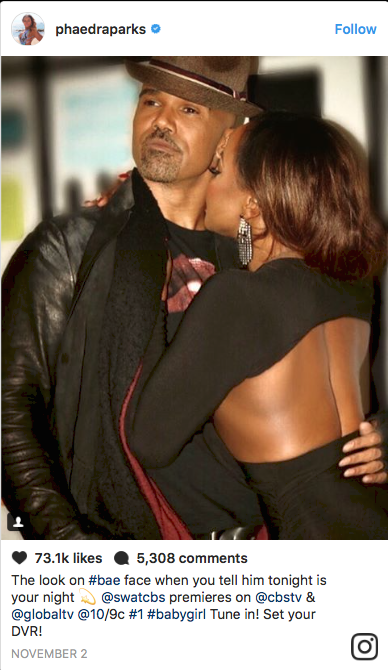 Moore finally came clean about their status while being interviewed by E! News’ Daily Pop. When asked about Parks, Moore said:

“This thing, it’s crazy to me, I just woke up, like last week and everybody’s like, ‘Phaedra, Phaedra, Phaedra! And look, I met Phaedra doing a nighttime talk show with Andy Cohen and Andy Cohen does this thing late at night and he likes to get you to drink. And so you’re loose and you have fun on his show.”

“So I walked in and I saw Phaedra and I know who Phaedra- I’ve heard of Phaedra and she was looking like…and so she looked at me and I kinda had this sense of like, ‘Oh, she thinks I’m the guy from The Young and the Restless’ or ‘She thinks I’m a certain Shemar.’ And I said, ‘Well, I’m gonna introduce you to a different kind of Shemar. So I just decided to have a good time and she was such a good sport and we played and we flirted and we got our little kissy face on. And then that went viral and that’s the first and the last time that I’ve ever seen or met Phaedra.”

Parks, who has been divorced from Apollo Nida for a year, has not commented.