The Ciroc frontman is allegedly juggling two women at the moment. Diddy is reportedly dating singer Cassie Ventura and actress Cameron Diaz. And there could be more, we just don’t know about it. But it appears that two may not be enough to curve his appetite for the ladies.

There are reports that Diddy has been calling Jennifer Lopez, which he dated from 1999 to 2001. A source told Us Weekly that Lopez walked over to Diddy at Vanity Fair’s Oscar after party to apologize. She allegedly told him she was sorry for not returning his calls or text.

The source added that Lopez seemed friendly when she went over to Diddy but ‘it was weird.’ To be fair, Diddy could have been calling Lopez about a business deal or advice. But most will assume it was for the obvious reason. Uh, Lopez is single now.

At any rate, the source who thought it was weird was probably right. It could have been an awkward moment for several reasons. The first one being that Lopez was with her date, Casper Smart. 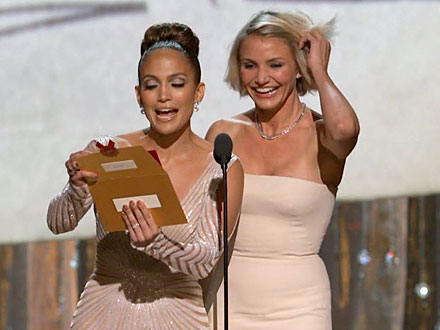 The next reason could have been that she felt obligated to come over because Diddy was starring at her in her low-cut dress. Oh, and lets not forget that Diddy was allegedly hanging out with Diaz at the party. Jennifer and Cameron presented an award at the Oscars together.

Will Lopez ever call Diddy back? Sure she will. But will she give into his advances? Probably not, she clearly wants something young and tender, her 24-year old boy toy.

But we’re sure Lopez gets a kick out of Diddy drooling over her.