Rob Kardashian has danced his way all the way to the Dancing With the Stars finals and Disick has had to watch most of it from home. Disick wasn’t allowed at tapings while Cavallari was on the show, Life & Style reports.

The magazine claims that just before Kourtney became pregnant Disick was dating Cavallari.

“While Kourtney and Scott were on a break, Scott hooked up with Kristin,” a friend reveals to Life & Style. “Kourtney can’t stand her now and didn’t want Scott at show tapings.” 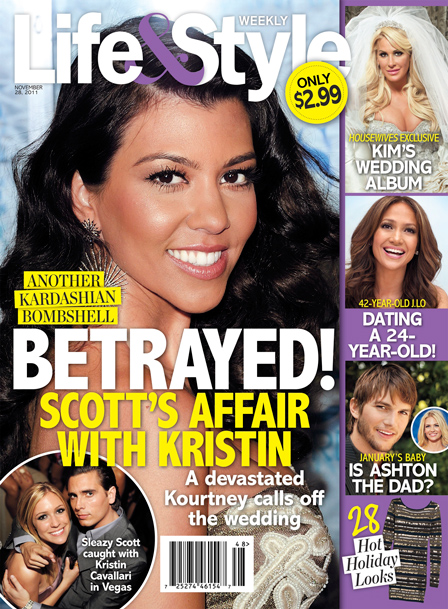 A Kardashian pal confirms that “Scott and Kristin definitely hooked up in Las Vegas during a time [February 2009] that he was on a break from Kourtney.”

Kourtney allegedly caught Scott and Kristin on a date at Apple Lounge in LA on March 11, 2009 and the two ladies have been at odds since then. “Kourtney was furious,” the friend said. “She and her sisters have called Kristin ‘the whore bag’ ever since.”

The Kardashian insider adds that both Kourt and Scott were BFFs with Cavallari, who used to date Kourtney’s stepbrother Brody Jenner.

“Kourtney was furious,” the friend said. “She and her sisters have called Kristin ‘the whore bag’ ever since.”

Kourtney’s anger didn’t stop Cavallari from hooking up with Scott.

“Actually, Scott and Kristin were hooking up on and off for a year, maybe even two,” another friend claimed before dishing on, “When Kourt and Scott would fight, he’d party with Kristin and hook up.”

Access Hollywood caught up with Cavallari and she quickly denied the rumors.

“First of all, it’s 100% not true,” stressed the 24-year-old when speaking to Billy Bush of Access Hollywood. “I just think, what convenient timing for them with [“Kourtney and Kim Take New York”] premiering next week [November 27] and with everything that’s going on for Kim, I feel like they’re trying to take the heat off her.”

“When there’s a big story like that, they always call you and ask if you want to comment and clearly none of them denied it,” she further said as referring to the Kardashian clan, “so it’s very… it’s really disrespectful to me and I’m in a committed relationship. It’s disrespectful to me and Jay [Cutler] and I think it just says a lot about their character.”