Duncan and the Spurs are in the midst of playing in the Western Conference finals. The 37-year old is dominating the Memphis Grizzles, helping the Spurs take a 3-0 lead in the series. But off the court, Duncan and his wife Amy Duncan are going through a divorce.

Amy, who allegedly moved out three weeks ago, filed for divorce in March. Although Duncan has made it clear that he will not talk about his personal life during the playoffs, speculation has spread like fireworks about why the couple may have split. 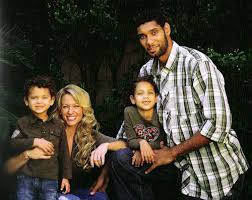 According to the San Antonio Express, Duncan had concerns about his marriage as long as a year ago and hired a private investigator to tail his wife. Duncan, who signed a three-year, $36 million extension last year, plans to enforce a prenuptial agreement the couple signed before the marriage.

The Duncans married in July 2001 and  have two children together.