Say What: K. Michelle and Safaree Samuels Spotted Out?!

K. Michelle and Safaree Samuels appear to have taken their flirting to the next level.

The Can’t Raise A Man singer and Nicki Minaj’s ex-boyfriend were allegedly seen getting smoothies together. But this latest development doesn’t surprise their fans.

You see, the two have been flirting online for quite some time. And this is not the first time the two hung out in public. According to TMZ, they also spent several hours together in the VIP at Stage 48 in New York on Valentine’s Day. Check out them getting smoothies below. 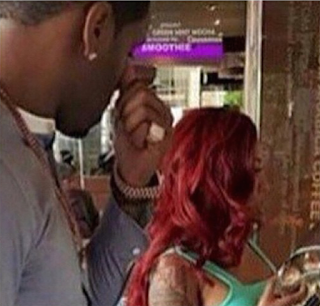 Earlier this year, K. Michelle posted video of herself twerking to Safaree’s first single since his break-up with Nicki. Then after rumors of a relationship died down, Safaree tweeted and deleted a compliment about K. Michelle.

It could have been a coincidence that both performers were at the same shop, but it’s highly suspect. K. Michelle appears to be hell bent on getting Nicki back for dating her ex-boo Meek Mill. She is the one who leaked the news that Nicki and Meek were dating.