Say What: Is Coco Austin Cheating With a Las Vegas Promoter? [Details]

Coco Austin has been linked to another man.

The Ice Loves Coco star is rumored to be involved with Las Vegas/Los Angeles promoter Jamie Thomas. This comes on the heels of AP.9 doing a media tour, revealing dirty details of his alleged affair with the Peep show star. Ap.9 claims he had unprotected sex with Coco on three separate occasions.

Now HipHopGossipSite reports that Coco has been living the single life since she’s been in Vegas headling Peep Show.

AP.9 Says He Had Sex With Coco Austin, She Denies It! [Details]

Coco allegedly started screaming and rushed out hysterically after an argument with Thomas. No one knows the reason for the outburst. But a club manager who chooses to remain anonymous states,”Those two have been having relations since CoCo arrived to Vegas and this whole town knows it.”

The Vegas promoter claims the rumors are false but this same promoter is reported to be in works for a Vegas based reality show on E! Network. 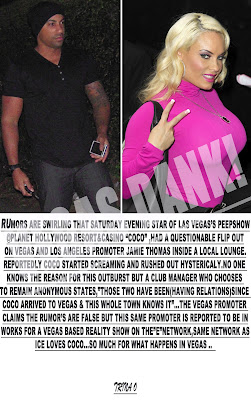 Coco, who is married to Ice T, is currently starring in Peepshow at Planet Hollywood resort and casino. She took over the show from Holly Madison who recently gave birth to a baby boy.