Say What: Is Apollo Nida Begging Fans For Money?!

Real Housewives of Atlanta star Phaedra Parks has been without a husband for quite some time.

All because Parks’ husband Apollo Nida is in a federal prison for fraud. He is serving an eight year sentence because he stole millions from at least 50 people over a four-year period.

Nida reported to prison in September 2014. Since then family, friends and fans have sent the former reality star letters and other gifts to past the time. A fan told The Shade Room she sent a letter to Nida and he wrote back asking her to put $25 to $50 in his prison commissary. 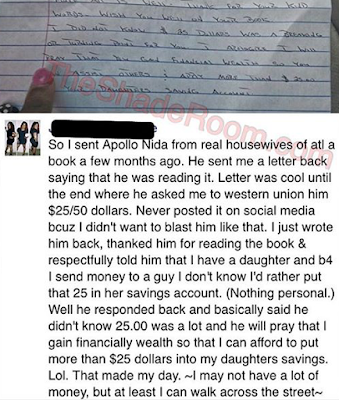 Although the fan didn’t send the money, you have to wonder why she even sent a book to a prisoner if she is so worried about her daughter’s future.