Say What: Did Lindsay Lohan Get Caught Stealing Again? [Details]

Actress Lindsay Lohan is doing a little damage control after reports emerged she stole from the set of Anger management.

Lohan reportedly told her friends that she did not take items from the set where she made a cameo appearance. The 26-year old allegedly told friends there was an agreement in place which allowed her to keep some of the items from the wardrobe department, TMZ reports.

A source told TMZ that Lohan left on Wednesday with two bracelets pants, sunglasses, shoes, a necklace, a silk bathrobe, lingerie, tap shorts and gold earrings. Lohan claims the person heading up the costume department was very aware she had taken the goods and was fine with it. She’s also said to be telling her friends she has no intention of returning the mementoes because she feels she has purchased them.

Lohan allegedly failed to verbally agree to what exactly would be taken before she walked off set. An on set stylist told producers she didn’t want to confront the matter into her own hands by stopping Lohan from leaving, instead choosing to bill the star for “all missing items.”

E! spotted Lohan in Brazil, where she is now visiting to promote a brand of jeans for $100,000 a day, wearing what looks like the bracelet she wore on the show.

Lohan has had a history with taking things that don’t belong to her. She allegedly stole one of Elizabeth Taylor’s prized bracelets in January. Before then, there were allegations that she stole $15,000 worth of clothes from the set of Scary Movie 5. The Mean Girls star reportedly stole a necklace in 2011 and a $11,000 mink coat in 2008.

Lohan must begin a court-ordered 90-day rehab stay after pleading no contest to reckless driving and giving false information to a peace officer. She was also sentenced to 30 days of community labor and 18 months of psychotherapy and ordered to pay a fine and restitution. 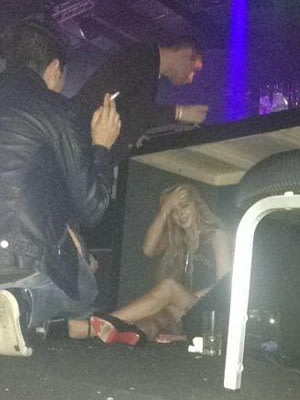 Meanwhile, Lohan was spotted hiding under a table in the DJ booth at a nightclub in Sao Paolo, Brazil on Thursday, because she didn’t want to take photos with fans.