Say What: Brandy Performs To An Empty Stadium in South Africa?!

Brandy was scheduled to perform at the Nelson Mandela Sport and Culture day in Soweto, South Africa over the weekend.

Unfortunately, the singer belted out tunes to an empty stadium. It appears no one bothered to get the word out about Brandy’s performance. And after the daily events, people in attendance packed up their belongs and left before the singer performed at the FNB stadium on Saturday.

According to several reports on Twitter, the stadium was nearly empty. The crowd that did stay around claimed that their were only 40 people in attendance.

Brandy was allegedly unhappy with the turnout and she cut her show short, only performing two songs. She allegedly couldn’t handle the disappointment and stormed off stage. Def Pen Radio caught a few tweets from a fan that was in attendance. 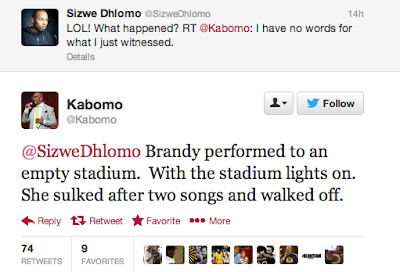 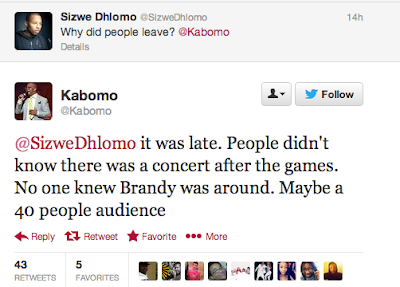 Yikes: Keri Hilson Travels Across the World to Perform & No One Shows Up! [Photos]

The event was a tribute to honor the life of former president Nelson Mandela. Nelson Mandela is still in the Medi-Clinic Heart Hospital in Pretoria in a critical but stable condition.