And the mother is not his fiancée Gabrielle Union. It appears that when Wade and Union took a break from their relationship, Wade began dating 30-year-old Aja Metoyera. During their fling, she became pregnant and the rest is history.

According to TMZ, Metoyer gave birth to son, Xavier Zachariah Wade, on Nov. 10. The child and mother live in Los Angeles. Metoyer allegedly has two children with Damon Wayans Jr.

Say What: Does NBA Player Dwyane Wade Have a Baby on the Way?

Rumors began to surface about the pregnancy in June, but Wade never confirmed or denied them. 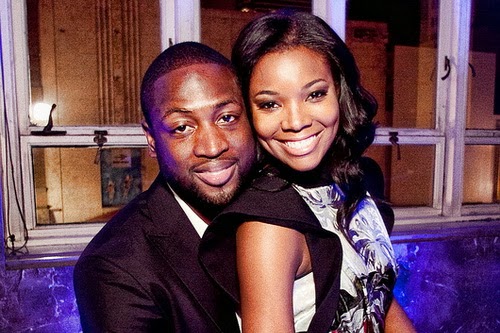 NBA star Dwyane Wade recently spent time with his new baby boy fathered with a woman while on a break with now-fiancée Gabrielle Union, a source close to the couple tells ET.

Wade, 31, and Union, 41, who were officially engaged last week, have worked through the issue privately as a couple, and the Bring It On star was aware of the child before their engagement. Wade has known the mother of his youngest son “for many years.”

The long-time couple, who have been dating since 2009, are still very much committed to spending their lives together, and according to the Miami Heat star last week, a September wedding is likely.

According to the source, Wade has never taken his fatherhood responsibility lightly and has no intention to do so now.

After the news broke, Wade confirmed the news during a press conference before the Heat played the Denver Nuggets on Monday. He simply said, “But, yeah, I had a time … in our pain and our hurt, (but) a blessing came out of it in my life, having a son that was born healthy. So, I’m moving on.”

When asked had he seen the child, Wade said,” Yeah, I’ve got a chance to see him. You know me. I’m involved in my kids’ lives. When my kids were living at home with me, or wasn’t living at home with me, I tried to do everything I could to see them. Obviously I got custody of them for different reasons, but nothing changes with my life. Like I’ve said, this is something that my family knows and my now fiancee worked through when we got back together, and understood that we wanted to continue our lives together and continue supporting our family and we’re going to do that. That’s what I’ve always done.”

“The goal is NOT perfection… The goal is to be whole…
That “you complete me” mess is total crap… Work on YOURSELF. Become whole, healthy & happy & watch what happens #LoveAndLight If u are unhappy/angry/resentful w/ ur life, before u pt the finger & place blame/shame on others… Look at urself. WE control our own destiny. Workin on ME has gotten me MUCH further than obsessing/criticizing/judging other folks. U never lose when u work on yourself.

Hope everyone has a great day! #LoveLightandGoodTimes”

Wade and Union’s engagement doesn’t seem as genuine now. It appears the marriage is more of a ‘I’m sorry I slipped up,” than a romantic engagement.