Say What: Dwyane Wade Cheated On Ex-Wife With Aja Metoyer?!

Wade managed to keep it a secret for a few weeks until TMZ got ahold of the birth certificate. The news came a week after Wade proposed to Gabrielle Union.

Wade tried to spin the story with claims that he fathered a son with Metoyer on a break from Union in the early part of 2013. But reports claim that was a lie. Wade and Union were very much together.

Now someone with the Twitter name of Aja Metoyer is confirming the reports. Metoyer allegedly admits that she began dating Wade nine years ago. The Heat star was married to ex-wife Siohvaughn Funches at the time. 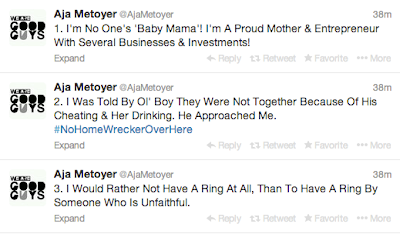 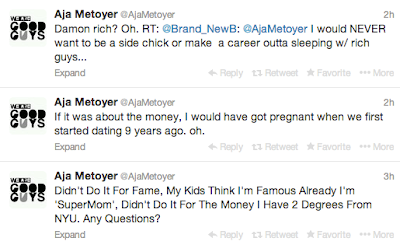 Wade filed for divorce from Siovaugh in 2007. He’s reportedly has juggled plenty of women at one time.

Prior to the news breaking, rumors were swirling that Wade was cheating on Gabrielle prior to “the break” after an anonymous letter was sent, to Mediatakeout.com early this year.

“Seems like the Miami Heat has made its appearance on mediatakeout yesterday. So its only right i put Dwayne Wade on blast. First and foremost i’d like to thank ***** Wade, his cousin for booking my numerous of flights.

Ohh yea, hi Ms. Union. Good too see you stuck around and have a few more pieces of clothing inside of his house. The kitchen looks great by the way. I love the new counter tops. I would also like to thank Rich, the chef for his amazing breakfast. His cookies are the best.

Also Gabrielle you are a little to old to be making Valentines day Photo albums. Leave that to the young girls your man cheats on you with. Dont believe me, i took a picture of the picture.

FYI your man likes fat a**es you might need to get you one. Last but not least. I will send you a picture of the bags your man left in the hotel room i f*cked him in. lol”