Actress Sanaa Lathan had a good time at the Watch the Throne concert in Los Angeles.

The actress drank champagne and mingled with other celebrities, which included Beyonce, Kim Kardashian and Jack Gyllenhaal. But she had her sights set on one particular ball player in attendance at the Staples Center on Dec. 13. Lathan was flirting and dancing with Kobe Bryant during the show.

“She touched his face, and she was shaking her a– in front of him to the  music,” s source told the New York Post. Bryant’s spokesman, Michael  Sitrick, says Bryant and Lathan were “both at the concert,” but he adds: “There was no flirting. There’s nothing there.”

But according to the New York Post source, Lathan came to the concert with a girlfriend, and Bryant, who was with teammate Matt Barnes and a bodyguard sat on opposite sides of the VIP area. But the two eventually ended up standing next to each other.

Lathan allegedly became progressively more flirtatious with Kobe. Lathan, 40, wore a sexy white-chiffon dress over what appeared to be a black bra. She was seen “whispering in his ear” and at  one point stroked the ballplayer’s face. “It seemed like a pretty intimate  gesture,” the New York Post source said.

“She was throwing her head everywhere. Her hair was like slapping him in the face,” laughs the source, who adds that at one point, one of the straps of Lathan’s dressed slipped enticingly off her shoulder. When West performed “All of the Lights,” Bryant and Lathan danced together.”

The New York Post source did admit that Bryant seemed “moody” and “down,” and the two seemed to go their separate ways. Lathan also went to her Twitter account to deny rumors of a relationship.

Lathan tweeted, “Can a girl have some fun at a jayz/kanye concert w/out being linked 2 a  breakup? I AM NOT, NEVER HAVE BEEN, INVOVLED W/KOBE IN ANY WAY.”

“Anybody who pays attention knows I’m not his type… Blank stare.   #blackgirlsrock #dontbelievethelies”

We are in total agreeance that Lathan is not Kobe’s type. But we would bet some money that if Kobe was up for it, Sanaa would have definitely been up for the challenge.

Right now, the number of women Kobe has been linked to is three. Bryant is also rumored to have an alleged fling with Kim Kardashian’s friend Carla Dibello. Fox News reports that DiBello has been on very friendly terms with Bryant for the last two years. 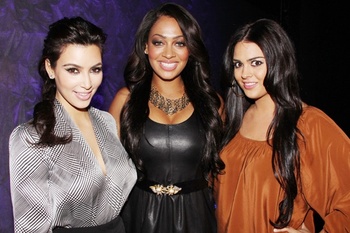 Dibello, who is a producer of the Kardashian reality shows, has been spotted court side at several  Laker games. Carla was director of strategic relations for SBE Group, which owns a number of exclusive hotels and clubs in Hollywood. Before then, she was Steve Wynn’s assistant at his
luxury hotel casino of the same name in Las Vegas.

Kobe has also been linked to playboy playmate Jessica Burciaga. This rumor is coming from not so creditable Mediatakeout.com so we’re not sure about this one. Mediatakeout, initially, reported that Bryant has been carrying on an affair for months with the Playboy model. But they have since retracted their statements. The website claims Burciaga was not in a relationship with Kobe but he tried to initiate one a few years back.

We wonder how many  women will Kobe be linked to before it’s all said and done.