Ryan Reynolds and Blake Lively finally get caught in the act.

Rumors have been swirling for weeks that the Green Lantern costars were dating. Now, we have photographic evidence of the couple spending time together during Reynolds’ birthday weekend. 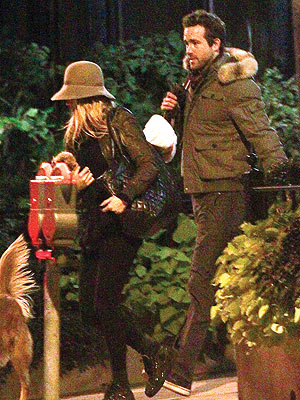 Reynolds and Lively were spotted outside his Boston apartment Saturday morning. Reynolds, who turned 35 on Sunday, is filming the action movie “R.I.P.D.”

“They are very much a couple,” a source tells People. “They’re really happy together.”

This not the first sighting of the two together. Lively and Reynolds were allegedly seen at a Radiohead show together in New York before they rode a train to Boston.

Lively, 24, recently split from Leonardo DiCaprio after a summer romance. Reynolds has been linked to many women including Sandra Bullock, Charlize Theron and Olivia Wilde.