Rush Limbaugh weighed in on Oprah’s brush with racism while shopping at a boutique in Switzerland.

Oprah recently revealed doing an interview with Entertainment Tonight that a store clerk refused to show her a handbag because she thought she couldn’t afford it. The incident caused an international firestorm with the owner of the boutique issuing an apology, but denied that their was any discrimination. The store clerk simply didn’t recognize Oprah.

Now Limbaugh is giving his own spin on things. The talk show host claims Oprah is looking at it wrong. Limbaugh said she may not been discriminated because of her skin color but because she’s fat.

“If I were Oprah, I’d be so happy I could go someplace and not be recognized,” Limbaugh said on Friday. “We’ve all been insulted by retail people. Maybe the judgement that The Oprah couldn’t afford a $38,000 bag had nothing to do with her race, because aren’t the Swiss enlightened in that regard? There isn’t any racism in Europe, right?”

Limbaugh added, “Don’t most people think that the fat and the obese are poor and stupid? Where do you see fat people? You see them at places where things don’t cost very much.” 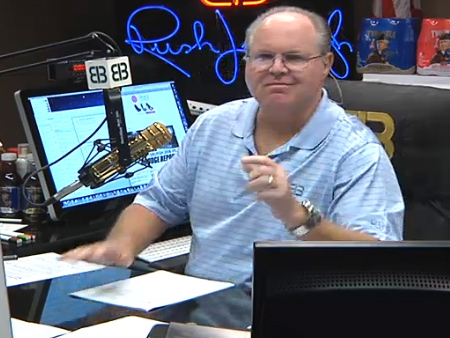 Limbaugh repeated his claims on Tuesday.

“Oprah is a plus size woman,” Limbaugh said. “You don’t see a whole lot of really fashionable, wealthy, overweight women… unless you get into the frumpy 70s, 80s, but even then it’s an exception to see a very wealthy, overweight fat woman, so the Oprah could have suffered a double whammy when it comes to discrimination.”

Photos via Oprah and RealClearPolitics.com