CNN contributor Roland Martin’s are numbered on the news network.

Martin announced on Twitter Tuesday afternoon that his last day with CNN will be April 6. Martin said he was leaving the network due to a decision made by new president Jeff Zucker.

Martin tweeted, “Last day at @cnn is April 6.” Martin then wrote in response to a question from a follower, “new boss wants his own peeps.” 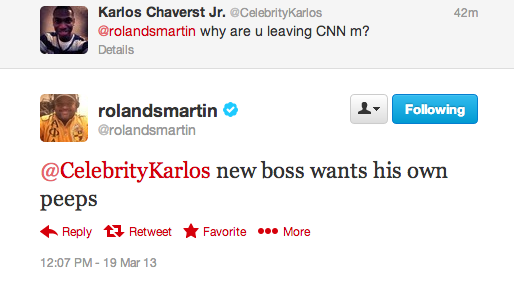 CNN spokesperson Edie Emery confirmed Martin’s contract will not be renewed when it ends in the first week of April. Martin told Richard Prince’s Journal-isms that his remaining time at the news network will remain the same.

Martin said, “In my final days at CNN when I’m on the air, I will do as the Tuskegee Airmen did, fight to the last hour, last minute, last second, for what is right . . . “

Martin, who also a syndicated columnist and analyst for TV One, was suspended from the network last year after writing controversial tweets that were interpreted as homophobic by the Gay & Lesbian Alliance Against Defamation.