Rihanna wants to set the record straight for good.

RiRi is tired of people trying to pit her against Beyoncé. It happened again on Tuesday after she earned eight Grammy nominations, tying Drake and Kanye West for second-most nods. Beyoncé’ led all nominations with nine.

Then one fan who goes by @Rihannagang_ posted a grievance with this on Instagram. “Congrats and all to @badgalriri and all for her 8 Grammy nods but tbh fuck them because they snubbed her for Song of the Year and Album of the Year. Like how ni**a? I think they didn’t want her tied or passing someone else *cough cough* [lemon emoji].” 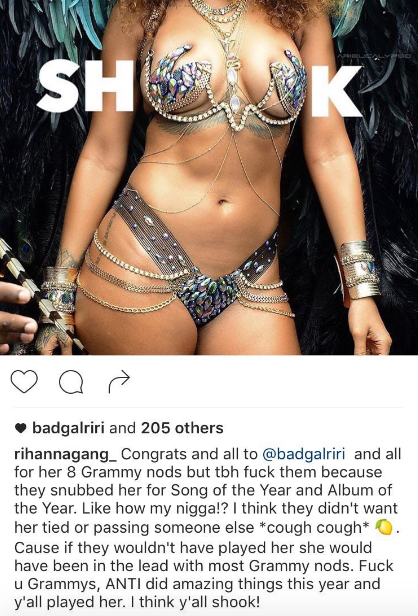 At first, it seemed Rihanna added fuel to the fire by liking the post. But RiRi later cleared things up with a lengthy comment about unity.

“I never actually read your caption, thought the pic was funny and moved right along! Til I seen it pop up over and over! I’m petty af, yes. But this is just unnecessary! I wish y’all would drop this topic and see things from the bigger picture! We don’t need to be putting black women against each other! We deserve to be celebrated, and the Grammy Academy agrees!”

Earlier this year, Rihanna made a similar comment during an interview with Vogue where she was asked about the perceived rivalry with Queen Bey.