Rihanna and Her Cousin Make Fun Of Karrueche Tran, She Snaps Back! [Details]

It all began when Karrueche posted a photo of herself wearing braids with the caption: ‘These braids and my peanut head lol.” The photo seemed innocent but not to RiRi’s cousin. She thought it was the perfect opportunity to throw some shade at Karrueche. 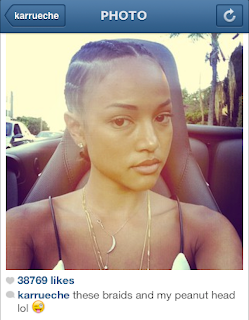 Shortly, after Karrueche posted the photo, LeLe reposted the picture on Instagram with the caption: “Why did one of my boys send me this?’ with a bunch of alien face emoticons. 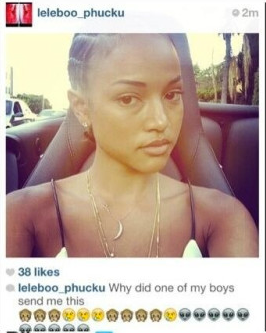 Rihanna immediately responded with a laugh. And then a exchanged between Brown’s exs ensued. Take a look below.

Karrueche noticed the comments and posted:

Rihanna’s Best Friend Goes in on Karrueche Supporter, Calls Brown’s Ex a Rice Cake! [Details]
This isn’t the first time that Rihanna’s cousin has made fun of Karrueche. LeLe and RiRi’s bestfriend Melissa Forde called Brown’s ex a ‘rice cake’ on Twitter last December.
Photos via Instagram and US magazine