Rihanna doesn’t hold back her tongue and when someone bites, she’ll bite back.

In the article, Jones recounts the occasions she’s met Rihanna and her disgust for the marijuana smoking, breast barring star that she’s become in the last few years. She believes Rihanna has become a horrible role model for young girls to follow.

“I wish she’d stop infecting our High Streets with her gun tattoos, her false nails and fake hair, her bogus bad-ass  shenanigans that try to portray her as ‘real,’ as ‘street,’ as her own person,  as strong and single-minded,” Jones wrote.

Jones also talks about Rihanna reconciling with Chris Brown. She posted the photo above with the caption, “After the beating from boyfriend Chris Brown (left) in February 2009 she had an opportunity to be a poster girl for young women escaping abusive relationships. But here she is again (right) with Brown last Christmas, all seemingly forgiven.” 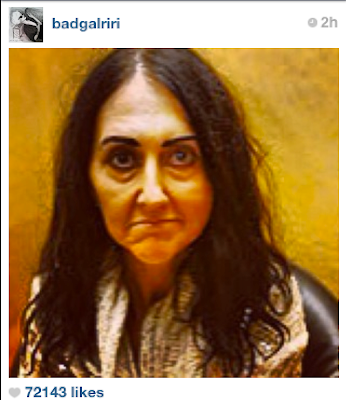 Once Rihanna read the article, she blasted Jones on Instagram. She posted an unflattering photo above of Jones with the caption:

“LOL!!!! My money got a bad habit of pissing people off!! If you sincerely wanna help little girls more than their own parents do, here’s a toxic tip: don’t be amateur with your articles, you sound bitter! What’s all this about hair and nails and costumes and tattoos?? ….That shit ain’t clever!!! That shit ain’t journalism! That’s a sad sloppy menopausal mess!!! Nobody over here acts like they’re perfect! I don’t pretend that I’m like you, i just live… My life!! And I don’t know why y’all still act so surprised by any of it!! “Role Model” is not a position or title that I have ever campaigned for, so chill wit dat! I got my own fucked up shit to work on, I’ll never portray that as perfect, but for right now it’s ME!! Call it what ya want!! Toxic was cute, Poisonous Pop Princess had a nice ring to it, just a lil wordy! And P.S. my first American Vogue cover was in 2011…APRIL!!! #ElizabethAnnJones”

Check out some of the photos that were featured with the article below.

The article, which does make some intelligent points, is essentially a takedown, but was it too harsh? Read  the entire piece here.