Rihanna and Drake Spotted on a Date in New York! [Details]

Rihanna and Drake have reunited in New York City.

The former couple was spotted having dinner at Sons of Essex in the Big Apple Saturday night. And it didn’t take long for the news to spread like wildfire. Throughout the night, the restaurant’s chef and DJ shouted the pair out, as well as a few patrons at the restaurant.

RiRi and Drake’s dinner date comes weeks after the Pour It Up singer revealed that Drizzy’s new song Hold On, We’re Going Home was her favorite song of the moment. Check out a few tweets from the Chef and some of the patrons in the restaurant below. 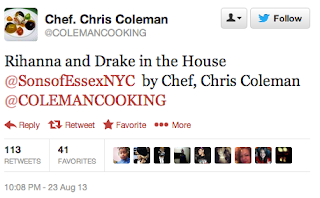 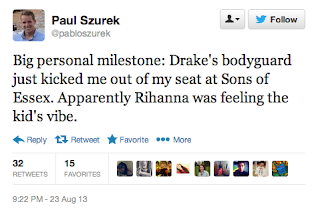 Although there were no photos taken of the two together, one patron was able to snap Drake walking through the restaurant.

Rihanna and Drake are scheduled to make appearances on the MTV Video Music Awards Sunday.
Photos via Instagram and Necole Bitchie