Rihanna took time away from her Diamonds World Tour to poke fun at her nemesis Ciara.

It’s been awhile since the two singers have gone at it on social media, so Rihanna’s assistant decided to ignite the feud again. RiRi’s assistant Jenn Rosales posted a fart joke about Ciara on Instagram. But instead of Rihanna ignoring the corny joke she commented on the post. The Pour It Up singer got both positive and negative comments from the exchange.

Check out the joke and Rihanna’s response below. 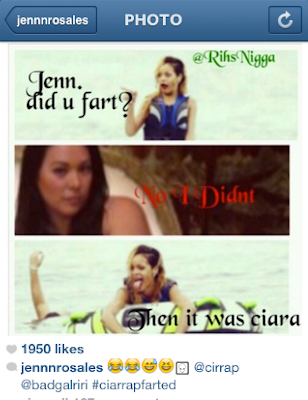 Ciara has not responded to the joke. The Body Party singer is on vacation in the Caribbean with her boyfriend Future.
Meanwhile, after weeks of promotion Ciara’s first album in three years comes up short in its first week. The self-titled album came in at No. 2 on the Billboard chart behind Jay-Z’s Magna Carta Holy Grail with 57,515 albums sold. Jigga’s album moved 525,208 copies.
Photos via Instagram and Pop Crush