Rihanna, Chris Brown & Drake Will All Be Seated Next to Each Other at MTV Awards

MTV is up to its crazy antics for this year’s Video Music Awards.

BET had its front row star power with Beyonce, Jay-Z, Kanye West and Kim Kardashian at its annual awards show. Now MTV hopes to do the same thing for this year’s Video Music Awards. Chris Brown, Rihanna and Drake are all sitting in close proximity on the front row.

E! News got a sneak peak at the Los Angeles Staples Center where the ceremony takes place and noted that the former couple is sitting in the front row seven seats apart.

The members of One Direction and Pink fill the seats in-between Rihanna and Brown. To Rihanna’s other side is Katy Perry, Drake, Nicki Minaj, Lil Wayne and Taylor Swift. 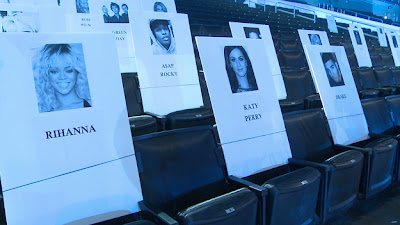 Rihanna will open the show while Minaj will appear as a special guest performer with one of the previously announced acts which includes Swift, Green Day, Alicia Keys, Pink, One Direction, Lil Wayne and 2 Chainz. Comedian Kevin Hart will be the host of the award show that will kickoff at 8 p.m. Thursday.