Rihanna & Chris Brown are in St. Tropez, Karrueche Tran There Too! [Photos]

Rumors of Chris Brown and his girlfriend Karrueche Tran breaking up are not true.

Brown and Rihanna may be in the South of France at the same time but Karrueche Tran is there too. A photo has surfaced of Brown and Karrueche arriving at the Cannes, France airport together.

The photo debunks rumors of a split that spread like wildfire last week. It was rumored that Brown, 23, abruptly deleted all photographs of his girlfriend of two years from Twitter after he found out she had been communicating with Drake.

A rep for Brown told RumorFix the rumors were false. When asked if the couple had split, Brown’s rep replied, “Not true.” The rep added that ‘Brown and Tran are very much a couple.’

This photo is of Karrueche trying to hand Brown his passport at the airport.

Despite the denial by Brown’s rep, the rumors still haven’t died down. Brown and Rihanna’s tweets have added fuel to the fire.

Brown followed the tweet with another photo and comment,”Landed on the boat!”

A few days earlier Rihanna sent out a subliminal tweet: 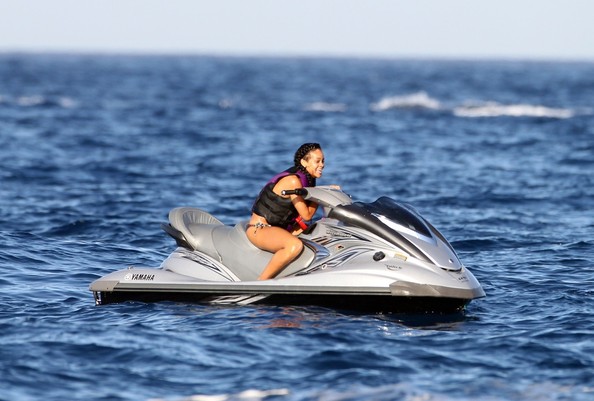 Many speculated that the couple hooked up that same night. But as it turns out, Karrueche has been there the entire time.